Petco Park is one of the newer stadiums in Major League Baseball. It opened in 2004 as the new home of the San Diego Padres. Keeping with the trend of modern ballparks, the stadium is located downtown, as well as adjacent to the San Diego Harbor.Summer days can get hot in southern California, so finding a place in the Petco Park shaded seats is important when going to see the Padres play.

Where are the shaded seats at Petco Park?

As a general rule, the seats in the shade at Petco Park are located:

The Padres start most of their games at 7:10 p.m. However, they like to switch it up for Saturday evening games during the summer and start at 5:40. Meanwhile, all of San Diego’s Sunday home games start at 1:10 in the afternoon. Finally, midweek games on getaway days get started at 12:40. For specific details about sections and different start times, read on.

Petco Park Orientation to the Sun

Petco Park is one of the few baseball stadiums built with home plate facing due north. It has a nearly identical orientation to ballparks in Cleveland and Arizona. This setup favors seats in foul territory when it comes to avoiding the sun. However, given the strength of the southern California sun in the summertime, it’s important to know exactly where the sun will be positioned at different times of day in order to stay in the shade for as long as possible. 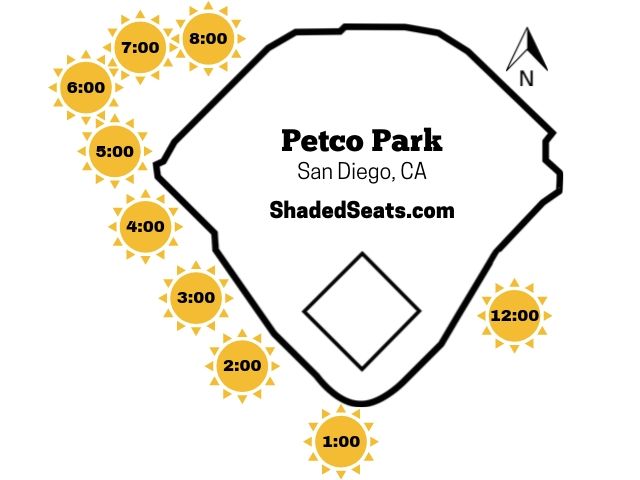 Click or tap here to open an interactive seating chart at Petco Park.

An early afternoon game at Petco Park will be the hottest part of the day under the San Diego sun. At this time of day, the best place to sit is the 200-level in the area behind home plate, sections 201-210. These seats will have the sun at their back for most of the game and an overhang from the upper deck above them to help shield them from the sun’s rays. The same principle will apply to seats in the back rows of sections 107-110, although there is somewhat limited space in these sections.

The good news is that as the game moves along more seats along the 3rd baseline will move into the shade. Again, seats in the 200-level and in the back rows of the 100-level will be the safest choice to move into the shade. Seats in the upper deck also have an overhang above them to help keep them protected. Sections 300-305 and even sections between 306 and 320 should end up spending most of the game in the shade, especially those seats further back in the section. Meanwhile, seats in right field and near the foul pole will be in the worst position. Sections 121-137 and 227-235, as well as other seats that are deep along the 1st baseline will be battling the sun all afternoon.

Seats in the Shade at Padres 5:40 games

Early evening games that start at 5:40 p.m. will put a large portion of the Petco Park stands in the shade. By this point, most of the 3rd base side of the stadium should have their back to the sun, making even sections 300-328, 202-224, and 102-124 a safe place to sit to avoid the sun. However, those seated along the 1st baseline probably won’t be as lucky, at least not at the start of the game. Those closest to home plate on the 1st base side of the stadium may get some protection as the game moves along. However, the sections mentioned above in right field and the corner near the foul pole will continue to deal with the sun shining in their direction.

Seats in the Shade at Padres 7:10 games

During the summer months, the sun sets in San Diego before 8:00 p.m. almost every night. This helps to minimize the number of fans in the stands who will have to battle the sun during the first couple of innings of a 7:10 game. If there’s any part of the stadium that will remain vulnerable to the sun during this time, it’ll be the right field corner. However, it should only be a few innings until the sun completely sets and is no longer an issue for the entirety of Petco Park.

Use the individual game links on the side (or bottom of the page on mobile) or click or tap here to see the Padres upcoming game list. Learn about why we recommend buying MLB tickets on Seatgeek.

Get Your Padres Gear

Get Your Padres Gear