The Toronto Blue Jays play their home games at Rogers Centre, a venue originally called SkyDome and their home since 1989. The ballpark is located in a busy part of Toronto on the banks of Lake Ontario. It was first stadium to have a fully retractable roof which has been emulated by teams in Milwaukee, Seattle and elsewhere. When the roof is open fans can use this guide to find the best Rogers Centre shaded seats.

Where are the shaded seats at Rogers Centre?

As a general rule, the seats in the shade at Rogers Centre are located:

In Toronto, night games typically start at 7:07 p.m. However, the Blue Jays to prefer to start Saturday home games at 3:07 p.m. and Sunday home games at 1:07 p.m. It’s important to take into account the angle of the sun at these different times of day when buying tickets to see the Blue Jays.

Rogers Centre​ Orientation to the Sun

Rogers Centre is one of a handful of major league parks where the batter faces north when standing at home plate. During the day the sun rotates from over home plate, and down the third base side of the park. Eventually it sets behind left field. Toronto is the northern-most MLB city which means on summer days it has one of the latest sunsets. 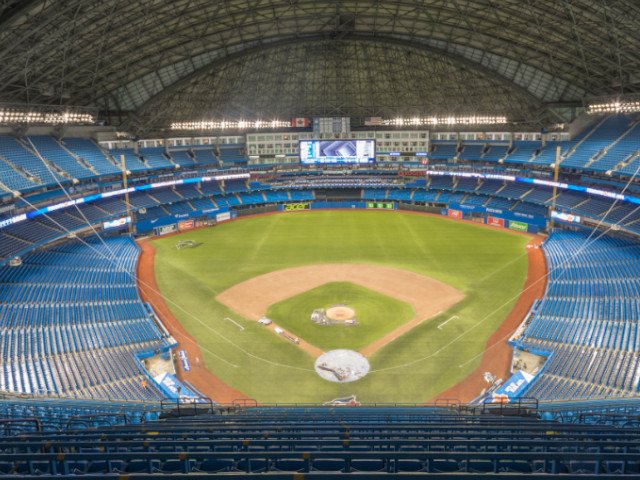 Click or tap here to open an interactive seating chart at Rogers Centre.

Seats in the Shade at Blue Jays 1:07 games

During the summer months, the sun in Toronto is located almost directly overhead around 1:00 p.m. This can make it difficult to find shade outside of the 200-level sections . The only other area of the stadium where you’ll have a chance to avoid the mid-day sun is in the outfield. The part of the roof that doesn’t completely retract hangs over the north part of the stadium above some of the outfield seats.

Seats in the Shade at Blue Jays 3:07 games

For games that start at 3:07, the sun will be behind the 3rd baseline at first pitch. This will help provide coverage for those sitting on the 3rd base side of the stadium, as their back will be to the sun. Even if there is some lingering sunlight at game time, they will surely move into the shade as the game moves along into the late afternoon.

Meanwhile, those sitting on the 1st base side of the stadium will be bathed in sunlight for a majority of a 3:07 p.m. game. That may include some of the sections in the center and right field sections of the outfield, as the sun will dip to a point in the sky that shines light onto them despite having a portion of the roof over them. Even seats in the 200-level that run parallel to the 1st baseline will be hit with the afternoon sun.

Seats in the Shade at Blue Jays 7:07 games

One anomaly of Toronto being located so far north is that the sun sets late in the summer. There are times during the summer when the sun won’t set until after 9:00 p.m. The last glimmer of sunshine will shine directly onto the middle portion of the 1st base side of the stadium. Sections 113 to 118, 210-218, 418-440, and 510-518 should be avoided for night games if you wish to stay clear of the sun. However, anything that’s directly behind home plate, along the 3rd baseline, or in the outfield should be fine.

Use the individual game links on the side (or bottom of the page on mobile) or click or tap here to see the Blue Jays upcoming game list. Learn about why we recommend buying MLB tickets on Seatgeek.

Get Your Blue Jays Gear

Get Your Blue Jays Gear