The Pittsburgh Pirates have called PNC Park home since 2001. PNC Park is located just a few blocks away from Heinz Field on the Allegheny River. It’s a gorgeous stadium that offers an amazing view of downtown. Pittsburgh is a city with plenty of summer sun and humidity, so you want to seek out the PNC Park shaded seats when you look for Pirates tickets.

Where are the shaded seats at PNC Park?

As a general rule, the seats in the shade at PNC Park are located:

PNC Park Orientation to the Sun

PNC Park was built with home plate facing east and slightly angled toward the south. This is a rare MLB orientation but similar to ballparks in Detroit and Chicago. As such, the sun rises in the morning beyond the left field stands and works its way across the outfield during the morning and early afternoon, drenching the playing field and stands with the sun’s rays. Depending on the time of day, large sections of PNC Park may be directly in the sunlight, so finding a seat in the shade can be a bit tricky. 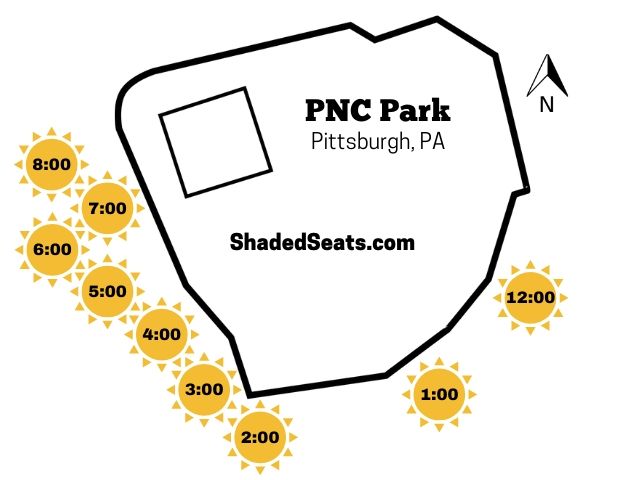 Click or tap here to open an interactive seating chart at PNC Park.

Early afternoon games at PNC Park will be the hardest to find a seat that’s in the shade. At first pitch, the sun will not quite have reached its highest point and it will be sitting behind the right field wall. The back rows of both the 300-level and the 200-level that are under the stadium’s overhang may be the only places to find protection from the sun at this time. On the flip side, anyone on the 3rd base side of the stadium will be looking directly at the sun for the first part of the game.

The only fans with their back to the sun will be those in right field, sections 139-147, but those seats offer no protection whatsoever from the sun’s rays. Gradually, the sun will start to move behind the 1st base side of the stadium, giving a little shade to that side of the stands. But it’ll be the fans seated in the back rows of the 300-level and 200-level that get the most protection.

Seats in the Shade at Pirates 4:05 games

By the start of a 4:05 game, the sun will have moved behind the 1st base side of PNC Park. Almost all of the seats on this side of the stadium should have a fair amount of shade, although the seats closest to the field in the 100-level may not have as much protection. At this time of day, the seats to avoid at all costs will be in left field and deep down the 3rd baseline, specifically sections 129-138 and 235-238.

The standing-room-only areas beyond the left field foul pole will also take a direct hit from the sun, especially the top level. As the game moves along, some sections along the 3rd baseline will start to move into the shade, although the closer you are to home plate, the more likely you are to receive some protection from the sun by the middle or late innings.

Seats in the Shade at Pirates 7:05 games

For most of the summer, the sun sets in Pittsburgh somewhere between 8:30 and 9:00 p.m., meaning there’s over an hour of sunlight left at PNC Park for the start of a 7:05 game. At first pitch, the sun will be almost directly behind home plate. This will help provide protection for almost every seat in foul territory, as the stadium overhang will cast shade on a majority of the stands. Of course, most of the seats in the outfield will remain the exception to this. Those seated in left field, in particular, will be facing the sun until it dips low enough in the sky for the stadium to block it.

Use the individual game links on the side (or bottom of the page on mobile) or click or tap here to see the Pirates upcoming game list. Learn about why we recommend buying MLB tickets on Seatgeek.

Get Your Pirates Gear

Get Your Pirates Gear