The Milwaukee Brewers play at Miller Park (now officially called American Family Field), located a few miles west of downtown Milwaukee and the shores of Lake Michigan. The stadium features a retractable roof that can open and close in about 10 minutes. However, on nice days, the Brewers like to keep it open, so it’s important for fans to find seats that allow them some protection from the sun. This guide will help you located the best Miller Park shaded seats.

Where are the shaded seats at Miller Park?

As a general rule, the seats in the shade at Miller Park are located:

The Brewers start most of their home games at either 7:10 or 6:40 p.m. However, all Sunday home games and some weekday getaway days start at 1:10 p.m. The club will also sprinkle in a few 3:10 p.m. games, usually on Saturdays. Most fans will want to pick their seats based on which sections will be in the shade at different times of the day.

Miller Park Orientation to the Sun

Miller Park has a similar orientation to ballparks in Cincinnati and Chicago. It was built with home plate facing east-southeast. This means the stadium gets plenty of morning sun and heats up early in the day. Certain parts of the ballpark also get plenty of sun during the afternoon and evening. During the summer months, it gets surprisingly hot in Milwaukee on sunny days, so most fans will prefer to find some shade if they can. 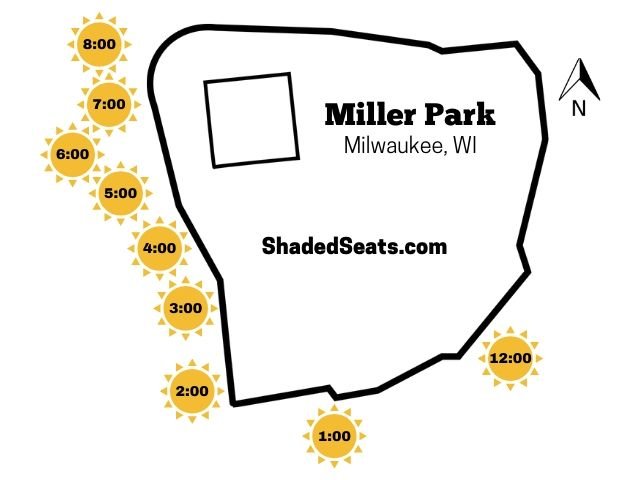 Click or tap here to open an interactive seating chart at Miller Park.

Seats in the Shade at Brewers 1:10 games

At first pitch of an early afternoon game at Miller Park, the sun will be in the southwest quadrant of the sky, slowly creeping behind the 1st base side of the stadium. Even if there’s a little sun early in the game, seats deep down the 1st baseline should receive plenty of protection from the sun during the game. Fans in sections 404-420 in the upper level, as well as 206-215 and 106-115 in the lower level should remain with their backs to the sun for most of their game.

Seats beyond the right field wall should also receive some protection, although they may have to deal with the sun later in the game. Meanwhile, most of the lower level seats along the 3rd baseline and left field should be avoided during a day game if there’s any chance the roof will be open. The roofing structure may cast some shade on sections 428-438 in the upper deck, but most spots on the 3rd base side of Miller Park will have to battle the sun in the early afternoon.

Seats in the Shade at Brewers 3:10 games

For a late afternoon game at Miller Park, seats on the 1st base side of the stadium remain the best option. Even as the sun moves toward the west during the game, sections along the 1st baseline will have the sun behind them. The worst places to be in Miller Park during these hours are in left field and deep down the 3rd baseline. Sections 230-238 and 436-442 will get a bulk of the sunshine at this time of day. As the game moves along, more of the seats on the 3rd baseline may be subjected to the sun, especially in the 100-level. Fans seated beyond the right field wall may also have to deal with the sun staring back at them by the late innings of a 3:10 game.

During the summer, the sun in Milwaukee doesn’t usually set much later than 8:30 p.m. However, that still leaves plenty of time for sunshine for a 6:40 or 7:10 game. The good news is that as the sun begins to set it will start creeping behind home plate. This should  keep most fans on the 1st base side of the stadium in the shade. Gradually, seats on the 3rd baseline should also start to receive protection from the sun. Of course, most of the seats in the outfield will still be contending with the sun into the middle innings until it dips low enough in the sky for the stadium to block it entirely.

Use the individual game links on the side (or bottom of the page on mobile) or click or tap here to see the Brewers upcoming game list. Learn about why we recommend buying MLB tickets on Seatgeek.

Get Your Brewers Gear

Get Your Brew Crew Gear